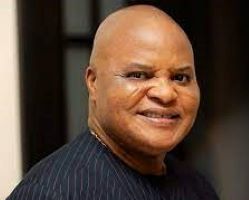 President Muhammadu Buhari has filed a notice of preliminary objection challenging the jurisdiction of the Federal High Court to entertain the suit by Senator Ifeanyi Araraume on his alleged illegal removal as non-executive chairman of the Board of the Nigerian National Petroleum Company Limited (NNPCL).

The objection was raised by the legal team of President Buhari, who is the first defendant in the suit, in a notice of preliminary objection brought pursuant to Section 2(A) of the Public Officers Protection Act, 2004 and under the inherent jurisdiction of the Honourable Court as provided by Section 6 (6) of the 1999 Constitution (as amended).

Specifically, President Buhari predicated his objection on three grounds, to wit: that the removal of Araraume (the plaintiff/respondent in the suit) as the non-executive chairman of NNPCL (2nd defendant/respondent) was done in his capacity as a Public Officer by virtue of Section 251 (1) of the 1999 Constitution (as amended); that the suit was a statute barred action , which offended  the provisions  of Section 2(a) of the Public Officers Protection Act, 2004 with respect to his administrative  acts or decisions made on January 17, 2022, being a period  of about seven months  prior to the filing  of this suit on September 12, 2022; and on the grounds that the suit  amounted to an abuse of court process, which ultimately deprived the court of the jurisdiction to entertain it.

A six-page written address was filed before the court in support of the preliminary objection where the three grounds were exhaustively argued.

The matter came up for mention on Thursday, December 15, 2022 before Justice Inyang Ekwo, but had to be adjourned to January 11, 2023 for hearing to enable parties file all their processes including their statements of defence.

Counsel to the second defendant/respondent-the Nigeria National Petroleum Company Limited (NNPCL), Oluseye Opasanya, SAN, had told the court that he had yet to receive the amended originating summons by the plaintiff in which he (plaintiff- Araraume) joined the Corporate Affairs Commission  (CAC) as ordered by the court on November 9, 2022 as a necessary party.

He said that consequently, he would plead with the court to grant him extension of time to enable him respond to the amended processes.

Justice Ekwo enjoined parties in the matter to ensure housekeeping prelude to the January 11, 2023 hearing date.

He said: “on the date fixed for next proceeding, housekeeping should have been concluded and I hereby enjoin all counsel to cooperate with the court for expeditious determination of this matter for hearing.”

He said that parties should be prepared to exchange processes before January 11, adding that there would be no service on that day.

He warned that “Any party that defaults will be penalised by the court.”

The NNPCL, which is the second defendant in the suit had also filed its notice of preliminary objection challenging the competence of the suit and praying the court to make an order dismissing it; or, in the alternative, make an order striking out Araraume’s originating summons dated September 12, 2022 (now amended); or make such further order or orders as it (the court) may deem to make in the circumstances.

They listed the grounds of preliminary objection to include the fact that the plaintiff (Araraume’s) action was statute-barred having regard  of Section 2 (a)of the Public Officers Protection Act Cap P41 LFN 2004; the action constituted an abuse of court process being one that was not supported by law, having regard to the provisions of the Interpretation Act 2004; the Petroleum Industry Act 2021; the Companies and Allied Matters Act, 2020; and the Articles  of Association of NNPCL

Besides, they averred that the suit was wrongly commenced by originating summons  as the 75-paragraph affidavit in support thereof, raises inherently contentious  facts; and the  originating summons required proof by oral evidence; and that the plaintiff’s suit, as constituted, is incompetent, lacking in any cause of action; nor carrying any right of action, having regard to the statutory powers of the 1st defendant/respondent implicated in this action.

Parties will join issues on the issue of jurisdiction and other grounds of objection when hearing commences on January 11, 2023.

Recall that Senator Araraume had instituted the N100 billion suit against the Federal Government over his alleged unlawful removal as a non-Executive Chairman of the newly-incorporated Nigeria National Petroleum Company (NNPC) Limited.

Araraume had asked for N100 billion as damages caused him in the alleged unlawful and unconstitutional way and manner he was removed as the NNPC chief after using his name to incorporate the entity.

When the matter was called on Wednesday, November 9, 2022, one of Araraume’s counsel, Mr Chris Uche, (SAN) had told the court that all parties in the matter had been served the necessary processes.

The judge, Justice Inyang Ekwo, had, however, evoked provisions of Order 9 Rule 14 (2b) of the Rules of the Federal High Court that allows a judge to order a party whose presence in a matter is pertinent to join the matter.

Justice Ekwo ordered that the Corporate Affairs Commission (CAC) be joined as a party since the case had to do with interpretation of the Company and Allied Matters Act (CAMA).

There was no objection from any of the parties.

The judge had adjourned the matter until December 15 for mention and ordered that the amended originating summons be served on parties before the adjourned date.

Senator Araraume had formulated four issues for determination by the court.

One of the issues was whether in view of the provisions of the Memorandum and Articles of Association of the NNPC, Companies and Allied Matters Act 2010 and the Petroleum Industry Act 2021, the office of the non executive chairman is not governed and regulated by the stated provisions of the law.

Araraume had also asked the court to determine whether by the interpretation of Section 63 (3) of the Petroleum Industry Act 2021, the president could lawfully remove him as non executive chairman of the NNPC for any reason outside the provisions of the law.

He further asked the court to determine whether the president could sack him without compliance with expressly stated provisions of the Articles of Memorandum of Association of the Company, Section 63 (3) of the PI Act 2021 and Section 288 of the CAMA Act 2020.

Another issue for determination was whether his purported removal vide letter of Jan. 17 without compliance with expressly stated provisions of the law was not wrongful, illegal, null and void and of no legal consequence whatsoever.

The plaintiff had asked the court to, upon determination of the issues in his favour, make a declaration that his position as non executive chairman of the NNPC was exclusively governed and regulated by CAMA 2020, Petroleum Industry Act 2021 and Memorandum of Association of the Company.

“A declaration that by the provisions of Section 63 (3) of the PI Act, CAMA Act and Memorandum of Association of the NNPC, the president cannot by will remove him from office as non executive chairman without following due process of the law.”

The former lawmaker asked the court for an order setting aside his removal by the president via a letter of Jan. 17 with reference number SGF.3V111/86.

He also asked the court for an order reinstating him and restoring him to office with all the rights and privileges of the office of the NNPC non executive chairman.

He also asked the court for an order nullifying and setting aside all decisions and resolutions of the NNPC board made in his absence from Jan. 17 till date.

He asked for an order restraining the defendants from removing his name as director of the company.

He asked for N100 billion as damages for the wrongful removal, disruption and interruption of his term of office as non executive chairman of the NNPC.

In a 75 paragraph affidavit in support of the suit, Araraume averred that upon the passage of the Petroleum Industry Act 2021, the former NNPC and its subsidiaries were unbundled to become Nigeria National Petroleum Company registered with the Corporate Affairs Commission with number 1843987.

“On Oct. 20, 2021, the president approved my appointment as a non executive chairman for a period of initial five years and subsequently, my name registered in the Memorandum of Articles of the Company and the appointment was announced to the whole world.

“Based on the appointment, I attended the 23rd World Petroleum Congress in America but surprisingly on Jan. 7, the president inaugurated the NNPC Board without recourse to me while another person was named in (my) place.”

“By a letter of Jan. 17, I was informed of withdrawal of my appointment but without any reason whatsoever to justify the purported removal.”

The plaintiff asserted that he was not guilty of any preconditions for removal or adjudged medically unfit for the job.

He asserted that he had suffered loss of credibility and goodwill, untold emotional, mental and psychological trauma and public humiliation on account of his alleged unlawful removal.

He had therefore prayed the court to award him N100 billion compensation and to order his return to office in line with the letter and conditions of his appointment.