NYSC DG charges corps members to be agents of unity

By EditorDecember 20, 2022No Comments3 Mins Read 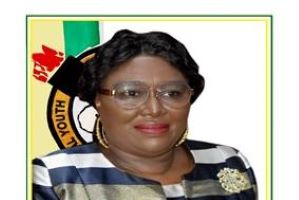 The Acting Director-General of the National Youth Service Corps (NYSC), Mrs Christy Uba has charged Corps members of the Batch C Stream II to be agents of unity for the country.

She made the call on Tuesday in message to the Corps members during the closing ceremony of their orientation course at the Old MacGregor College, Afikpo, Ebonyi State.

Represented by the State Coordinator, Mrs Mercy Bamai, the DG also warned the Corps members against involvement in local politics.

She urged them to sustain the spirit of patriotism, hard-work and resilience which they imbibed during the orientation course.

Mrs Uba expressed hope that they will strive to meet the expectations of Nigerians by contributing towards the progress and development of the  country.

While urging them to accept their posting in good faith, the DG charged the Corps members to perform their duties with diligence and be guided by the provisions of the NYSC Act and Bye-Laws as well as workplace rules and regulations.

“In keeping with the objectives of the scheme, you are expected to integrate into your host communities while also appreciating and respecting their cultures. You must desist from meddling in their local politics,” she said.

Mrs Uba advised the Corps members to build on the skills they acquired in camp to enable them become self reliant.

She said the scheme is liaising with financial institutions and other stakeholders with a view to providing start-up loans to enable the Corps members actualize their business dreams.

The DG urged the Corps members to avoid using the social media to promote hatred and ethnic jingoism but for self improvement and promotion of unity.

“At all times, you should be good ambassadors of the NYSC as well as your families and institutions of graduation.

“Therefore, you must be wary of acts that can portray the scheme in bad light, especially drug abuse and trafficking, cyber-crime and Advanced-Fee-Fraud and spreading of fake news, amongst others.

“Also remember that your membership of the Service Corps does not confer on you immunity from the legal consequences of any wrongdoing. You are, therefore, enjoined to continue to be law-abiding while also serving as role models for the younger ones.

“I urge you to avoid using the social media for ethnic jingoism, rumour peddling and the promotion of hatred. Instead, your activities online should be targeted at self-improvement as well as promotion of the unity, peace and development of our dear country,” she said.

A total number of 869 corps members comprising 388 males and 481 females were registered for the batch and were posted to various places of primary assignment in the 13 local governments of the State.