Gives tips on how it can be turned into wealth creation

By EditorDecember 21, 2022No Comments5 Mins Read 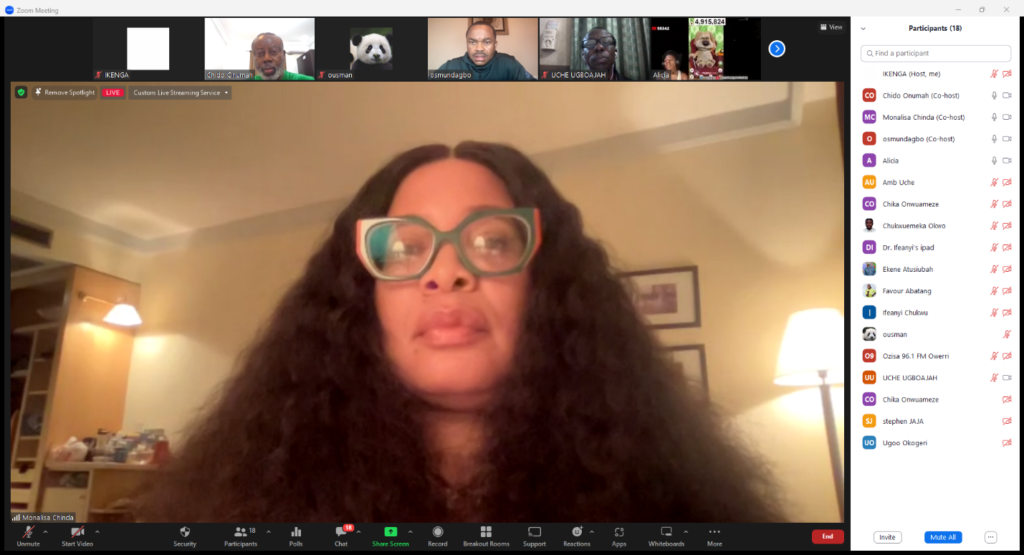 Multi-award-winning Actress and Director of Communications, Actors Guild of Nigeria (AGN), Monalisa Chinda Coker, has decried the devastating effects of the Monday sit-at-home protests on the economy and social lives of youths in the South-Eastern region of Nigeria.

The 2011 ‘Face of Port Harcourt’ who made the observation, Tuesday night, while featuring as Keynote Speaker at the December edition of the Ikengaonline monthly Town Hall meeting, said  the monster posed existential threat to the entrepreneurial spirit and zest of Igbo youths.

Members of the Indigenous People of Biafra, IPOB, had declared Monday sit-at-home to protest the extrajudicial rendition of its Leader Mazi Nnamdi Kanu, but later canceled it following public outcry.

However, despite the cancellation, some enforcers of the order believed to be loyal to Mazi Simon Ekpa, a self-acclaimed disciple of Kanu, have continued to unleash mayhem to violators of the order in some parts of the region.

Consequently, major cities as well as many towns in the South-East are usually deserted on Mondays as residents rather choose to remain indoors, some out of fear of the unknown.

Speaking on the theme: “Igbo Youths: Harnessing Talents through Art and Entertainment,” the ace Film Producer, noted that the monster could be turned into wealth creation by scripting movies that depict the impacts of the sit-at-home with a view to changing the narrative.

She harped on the need to begin to harness talents of Igbo youths through art and entertainment.

According to her: “There is  challenging threat to South-East youths of today because of this Monday sit-at-home. It poses a threat to their collective talents and future.

“Weekends now extend to Mondays and this is affecting our entrepreneurial narrative and socio-cultural trajectory.

“This zest experiences systematic miscarriage that leads to collective experience which disconnects every aspect of the entrepreneurial spirit of our youths.”

The Nollywood superstar further noted that “even when the sit-at-home eventually stops, it will still have negative impacts on the collective minds of the youths.”

According to her, the spirit of Mondays which is a very critical day of the week, has been hijacked by sit-at-home, a development, she said was a danger signal to the economic survival of the enterprising Igbo race.

She further regretted that  fear had been allowed to take away and subjugate Mondays in the South-East and other neighbouring cities including Port Harcourt, Benin, Asaba as well as other states that have business dealings with South-East.

The Actress also decried the continued erosion of original Igbo ethics and values, adding that the spate of unnecessary killings, drug abuse and other vices are indications of strange happenings in Igbo land.

“All these are alien and taboos to our ancestral heritage,” she lamented.

On how to change the narrative, she said the youths must take the lead by taking their destinies in their hands.

“Nobody can change the narrative than the youths themselves. The youths of South-East need not  allow further triggering of mayhem that had already taken roots.

“They can decide to dry up the water supply by giving energy to more valuable initiatives guided with speed into another space of creative entrepreneurial exploration.”

She hinted that her foundation, Arise Monalisa Foundation, “is creating and pioneering sustainable creative strategy, creatively designed to position the Igbo youth in society.”

One of such ideas, according to her, is to explore on-line creative hub which she said the foundation “is currently developing” with its creative partners.

“We wish that Igbo youths will express their creative feelings about Monday sit-at-homes.”

She urged creative minds to start coming up with scripts on the impacts of sit-at-home on Igbo youths.

“We can decide with the youths how to use their own creative ideas to bring down the monster,” she submitted.

This, she added, would help to destroy the fears that had crept into the minds of people over sit-at-homes in the South-East.

In his submission, Ikengaonline the co-host of the two-hour monthly virtual town hall meeting, Dr Osmund Agbo, said that Monday sit-at-homes had taken severe toll not just on the economic but psychology of South-Easterners.

“It is against everything that we stand for as Igbo people,” the US-based Medical Doctor lamented.

“It’s trying to cripple all our achievements after the brutal civil war. After working so hard with the spirit of ‘Igwe bu Ike’ (strength in unity) to recover from the devastations of the civil war, these senseless killings during sit-at-home have become existential challenges.”

Co-host, Dr Chido Onumah, harped on the need for South-East youths to to tap into the numerous opportunities in the movie and entertainment industry to eke a living.

Many people joined from different parts of the world during the virtual town hall meeting.

Ikengaonline is a news platform of the Ikenga Media & Cultural Awareness Initiative (IMCAI).

Ikengaonline has been organising series of virtual town hall meetings aimed at giving media attention to issues of regional and national concern in the South-East geopolitical zone.

The platform also gives voice to citizens of the South-East, and parts of Rivers and Delta states, and highlights the challenges facing the region.

Ikengaonline is supported by MacArthur Foundation in conjunction with the Wole Soyinka Centre for Investigative Journalism (WSCIJ).