By EditorDecember 23, 2022No Comments6 Mins Read The bullying of the Nigerian media by the presidential candidate of the All Progressives Congress (APC), Asiwaju Bola Ahmed Tinubu, is real. It has heightened in recent weeks as a primitive ploy to cover up the lingering allegations of his drug case in America. But the news media must not succumb to the chicanery.

The pattern of bullying came to limelight when the Boards of Editors of ThisDay Newspaper and The Arise News Channel alerted the nation last week. Of course, the Tinubu Campaign Council did its best to deny the ugly development, but the media organisation is not alone. There are many living witnesses, this writer not excluded.

I had actually whispered this storyline earlier in the piece, “Chatham House, Tinubu’s Drug Case, And The Press,” even before the ThisDay exposé.

The observation became obvious given my experiences with the media in recent times. In short, I have been expressing opposing views of every major presidential candidate since the Fourth Republic. Interestingly, as a member of the APC, my critical opinions of the then President Goodluck Jonathan and Former Vice-President Atiku Abubakar had appeared in virtually all sections of the Nigerian media during the elections of 2015 and 2019 while I was promoting Muhammadu Buhari. All in all, I had always extolled the Nigerian press as free, vibrant, and fearless. But this electoral cycle is dramatically different—with dishonour.

Any remote attempt to hold candidate Tinubu accountable has been met with all manner of threats and theatrics. These shameless threats are not only directed towards me, but also to the innocent editors who dare to publish my views. Even when they do, some of them are cowed to ensure that the serious scandals of the Asiwaju, particularly the alleged narcotics trafficking, do not see the light of the day. The objective fact is that, as the most arrogant, most immodest, most dictatorial, most diabolical, most authoritarian, most shady, and the most narcissistic presidential candidate in the Nigerian history, Tinubu is bent on playing by different rules.

But the media must not allow the dubious broom of the Asiwaju to sweep the drug case under the carpet. 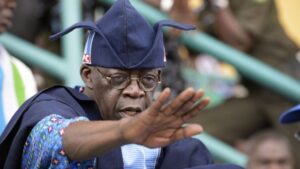 This matter is serious. It is neither fake news nor planted as an election hue by his opponents. An indelible fact is that Mr. Bola Ahmed Tinubu had in the past forfeited the sum of $460,000.00 to the authorities in the United States of America. This forfeiture—”a penalty for wrongdoing”—resulted from a case where he was charged for narcotics trafficking and money laundering. At the time of this unfortunate outcome, even though his legal income was a meagre $2,400 per month, the U.S. criminal investigators found over 1 million U.S. dollars in his bank account. The court documents remain unambiguous.

Instead of investigating the case and reporting it as it is, some of the news organizations appear compromised. Any simple scan of such mercenary newspapers will show that their coverage is crafted to favour Tinubu at all costs. It was laughable to read how they embraced the bunkum from the Tinubu Campaign Council that a whopping sum of $460,000.00 their principal forfeited to the U.S. authorities was for TAX deductions. That is, a tax deduction of $460,000.00 from a man who swore under penalty of perjury that he was making only $28,800.00 per year and had no other outside income!?

Fellow Nigerians, what is going on? Who is zooming who?

The simple answer to the above questions is that I can count 1, 2, 3…Clearly, Asiwaju Bola Ahmed Tinubu is attempting to insult his way to the presidency by using pecuniary influence to tame the press.

Granted, the APC leader already enjoys an unseemly sense of esprit d’ corps within the political press. After all, the Asiwaju of Iragbaji owns a major TV station (TVC), a daily newspaper (The Nations), and other media outfits, whose sole raison d’être is to promote him and undermine his opponents. Further, unlike the other candidates with lean pockets, Tinubu deploys his stupendous wealth to advertise heavily in most of the Nigerian media outlets.

But the consequences of succumbing to the Tinubu overtures are grave.

Let’s play the devil’s advocate for a minute and entertain the optics of Bola Tinubu as president. Even if the Nigerian media are subdued to downplay the drug matter, the United States will not. The American country has a hellish history with individuals who are alleged to have used drug proceeds to gain power in foreign nations. Imagine an attempt for outright prosecution and, of course, the stench of the social media sentiment that is bound to further mar the image of Nigeria. Imagine a potential blackmail and the extent Mr. Tinubu can travel to retain power. In short, having endured all manners of stigma in the comity of nations, the last public pong Nigeria would wish is a president who is globally seen as a corrupt kingpin cum drug lord.

I must not conclude without acknowledging the efforts of notable Nigerian news organizations who have remained tireless in this electoral cycle by upholding an important role of the press, which is to hold politicians accountable. But they are growing very frustrated. Despite Tinubu’s mounting flaws, including the shameless drug case, his abject disdain of the local press, as well malicious threats, his campaign continues to dominate the media space at the expense of his opponents.

But the patriotic men and women of the press should not be deterred. Nigeria has hit the rock bottom. The last resort is a true change, motivated by the masses, and anchored by a free press alert and bold to expose the ills of the candidates standing for elections in 2023.

A way forward is to checkmate Tinubu, particularly with the drug case, by wielding the big stick. It is incumbent upon the press to demonstrate consequences for bad behaviour for a man who undermines the Fourth Estate of the Nigerian democracy. To continue to promote the Asiwaju not only emboldens him but also amounts to aiding and abetting an enemy of the state.