By EditorDecember 27, 2022No Comments6 Mins Read 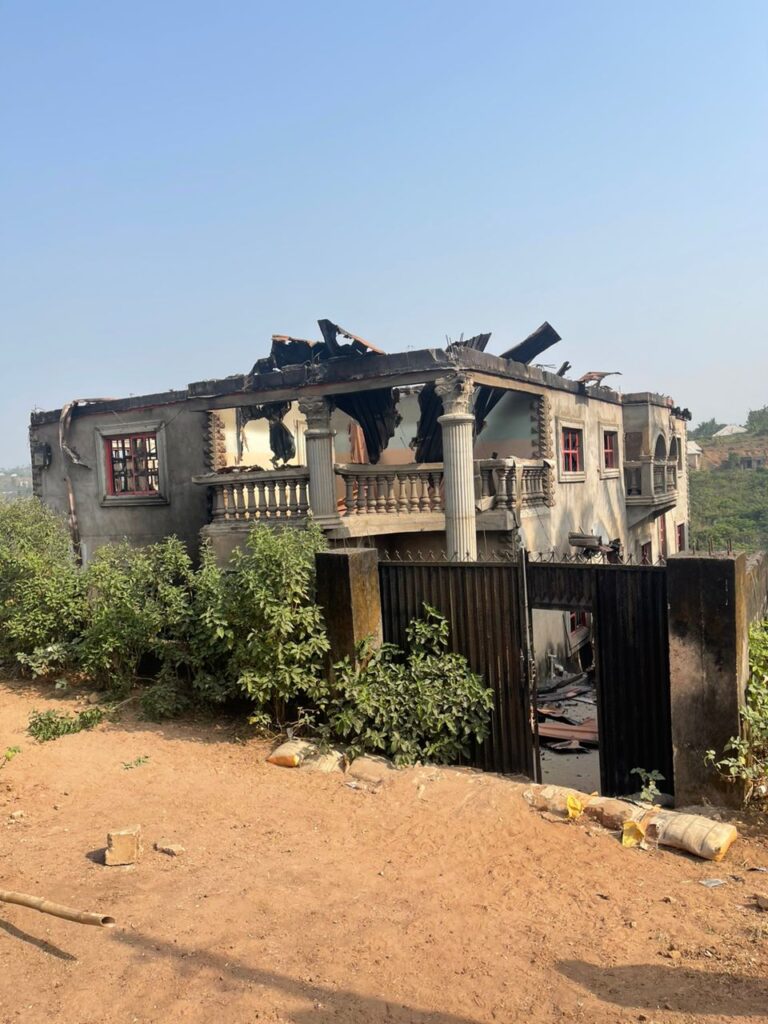 Governor of Ebonyi State, David Umahi has ordered for the immediate arrest and prosecution of the All Progressives Congress (APC) State Chairman, Stanley Emegha, and Mr Eni Uduma Chima, the party’s House of Representatives candidate for their roles in the murder of three persons in the community.

A statement by his Media Aide, Chooks Oko, said Governor Umahi gave the directive during an on the spot assessment of the level of damage in the area.

The Governor also directed the Commissioner of Police to arrest all those connected with the carnage and ensure they face justice.

The Governor while announcing the suspension of all social gatherings in Edda until normalcy returns, urged the Commissioner of Police to saturate the area with security presence to forestall further breakdown of law and order.

As at the time of filing this report, the whole Ekoli Edda community has been cordoned off by the combined team of the Police, Army and the Ebubeagu Security outfit.

The governor’s order followed the killing of three persons in the area in a clash by rival gangs loyal to two APC stalwarts on Monday.

One of the victims, it was gathered is a police officer while another victim is a brother to one of the stalwarts.

The incident, it was learnt, happened in Ekoli-Edda community in the council area on boxing day.

Sources in the area said rival groups loyal to the APC State Chairman, Stanley Okoro Emegha and the party’s House of Representatives Candidate for Afikpo North and Afikpo South Federal Constituency, Eni Uduma Chima, were involved in the clash.

Mr Emegha doubles as the Security Consultant to the State Government in charge of Ebuebeagu South-East Security Outfit.

Mr Uduma, a former Chairman of the local government area completed his second term in August.

Enraged by the incident, Mr Umahi on Tuesday ordered the arrest and prosecution of Messrs Emegha and Uduma.

One of those killed in the clash is a 39 years old man,  Eseni Kalu Egwu while the other is one Eme Orji, a brother to Mr Emegha.

Also, one of the houses in Mr Emegha’s compound in the community was set ablaze in the clashes.

A vehicle belonging to the Police and another vehicle in the convoy of Mr Emegha were set ablaze.

The duo hail from the community but have been political foes for a very long time.

Both are loyalists of the State Governor, David Umahi.

The clash was said to have started after an election into the leadership of a youth group in the area.

It was not immediately clear who started the clashes but sources alleged that armed supporters of the two APC stalwarts suddenly engaged each other in a gun fight leading to the death of the 29 years old Mr Egwu.

The source claimed that youths loyal to Mr Emegha arrived the market square in the area and shot sporadically into the air and left.

The development, the source further noted, attracted youths of the community loyal to Mr Eni, who regrouped and engaged the youths loyal to Mr Emegha in a gun duel.

The incident occurred at 6pm, on Monday.

“At night, unidentified gunmen stormed the country home of Mr Emegha and set it ablaze around 10pm,” the source said.

The APC Chairman, Mr Emegha confirmed the burning of his house.

He said the gunmen attacked him and his convoy unprovoked killing a Special Protection Unit (SPU), Police Officer attached to him.

He said two other persons from the village were also killed.

He said: “It was unprovoked and unbelievable. There was no quarrel or dragging of anything, they just opened fire on me and those who went with me to the village.

“Nobody knows if it was what they smoked or drank but I believe that someone was instrumental to it.

“Yes. It’s true. They attacked me tonight at Ekoli Edda community, and the same people, some of whom I know,  I have just heard, burnt my house.

“We have three casualties, an SPU Officer, Inspector Akpan, attached to me, and two other persons from the community.

“They burnt one police vehicle, a Sienna being used by AK department and my Hilux van.

Mr Eni could not be reached for comments at the time of this report. He did not take calls placed to his phone lines.

Meanwhile, Police spokesperson, Chris Anyanwu in a statement confirmed the killing of the policeman and two others.

He said one of those killed is a brother to Mr Emegha.

The statement read: “Ebonyi State Police Command is presently investigating a case of Murder, Arson and Malicious Damages to Government properties and individuals’ resulting from apparent struggle for supremacy and who controls the area politically among two notable  political stalwarts in Ekoli-Edda, Afikpo South LGA of the State.”

Mr Anyanwu noted that the Police received a distress call on boxing day that sporadic shootings and killings were going on at Ekoli-Edda between Ebubeagu operatives in Mr Emegha’s convoy and another group of men purported to be loyalists to Mr Uduma.

“It was further gathered that the open shoot-out was not far-fetched from previous grudges existing among the two factions.

“In the process,  a youth leader identified as Eseni Kalu Egwu was fatally wounded, later rushed to a neighboring  hospital at Ohafia, Abia State, where he was confirmed dead.

“Angered by his death, the youth of the area mobilized and went on rampage, killing Eme Orji, a younger brother of the State APC Chairman and an Inspector of Police attached to SPU.

The spokesperson also said that when Police Tactical Teams were dispatched to Ekoli-Edda to take control of the situation, they were ambushed by the youth of the area at the village entrance.

“However, the operatives maneuvered unhurt,” he added.

Mr Anyanwu said the bodies of the three deceased persons have been evacuated and deposited at different morgues.

He said two suspects were arrested among the irate youth while others are still at large.

“Also, the two political gladiators at the middle of the whole imbroglio, who happen to hail from the same community, have been placed on protective custody to douse the tension in the area, while a scrupulous investigation has been activated by the Deputy Commissioner of Police in-charge of SCIID here in Ebonyi State.”

The spokesperson noted that the Commissioner of Police, Aliyu Garba, has visited the scene and advised that everyone affected in one way or the other in the ugly development should keep calm as he wades into the matter.