By EditorDecember 28, 2022No Comments6 Mins Read 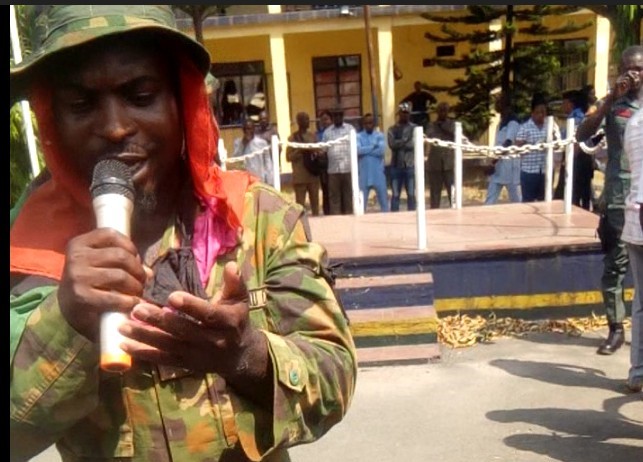 The Imo State Police Command has paraded one deserter from the Nigerian Army, Lance Corporal Nwangwu Chinwendu popularly known as “Onye army” aged 34-year-old man, from Amaohuru Nguru in Aboh Mbaise Local Government Area of Imo State, for allegedly involved in the killing of prominent persons in the state.

The police said the suspect was “one of the vicious commanders of the Eastern Security Network, ESN, of the Indigenous People of Biafra, IPOB.

Among the alleged attacks of the suspect, police listed are: “The recent killing of the Labour Party Senatorial candidate, burning of his house and Jeep. He led his gang members including one Okechukwu Duru and others, to kidnap one Jude Nwahiri on the 4th of November 2021, collected a ransom of 21 million naira (N21,000,000.00) after killing four persons in the residence of the victim at Amaohuru Nguru in Aboh Mbaise LGA, Imo State.

“The killing of one Police Inspector and Police Sergeant at Aboh Mbaise Police Station the day his terrorist gang attacked and burnt the police station.

“He led the kidnap of the white men on road construction along Umunna Okigwe Road and killed the mobile officer and soldier on guard duty. He led the attack on Umunna Okigwe Police Station and killed one Asp Danjuma and Inspector Ebi Atom, and also stole their service riffles.

“He was among the terrorist members that attacked Owerri Correctional Center and State CIID Owerri on 05/04/2021. The attack on the rapid response team at Ihite Uboma on 22/12/2022, set the Hilux ablaze and snatched their rifles.

“He confessed to serial kidnappings, armed robberies and car snatching within the command in recent times. The murder of the two Air force Officers at Naze Roundabout and snatched their service riffles.”

On how the suspect was arrested the police narrated: “The suspect, whose modus operandi is gorilla-like operation, that is, he unleashes surprise terror attack and goes into hiding in neighbouring states, was arrested on 23/12/2022 at about 1030 hours in his home town, Amahohuru Nguru in Aboh Mbaise LGA, after a diligent gathering of both credible and technical intelligence, during the late father’s funeral.

“The suspect who sat in a vantage position while his members were on surveillance on sighting the police operatives, took to their heels, engaging the Operatives in a shoot-out, using the crowd as a shield. The gallant Police Operatives, retaliated, professionally and tactically to avoid bullets hitting innocent persons in the crowd.

“He was later arrested after a long chase alongside two of his gang members with bullet injuries while others escaped. Amazingly, he did not sustain any bullet injury; this he attributed to the charms worn all over his body, which he called “Odeshi,” meaning native bulletproof. On searching the house and premises of the suspect, ex-Lance Corporal Nwangwu Chinwendu the following items were recovered at the station: -Five (5) Pump Action guns; Two (2) cut-to-size double barrels guns; Four (4) locally made pistols, Fifty (50) rounds of live cartridges; Nine (9) locally made hand grenades; ESN regalia and various charms and rings.

“In the course of interrogation, the terror Kingpin confessed to having enlisted into the Nigerian Army in 2013, where he trained as an engineer and became an expert in weapons handling and servicing of all heavy automatic weapons.

“He rose to the rank of Lance Corporal before he deserted the Army and joined the Indigenous People of Biafra (IPOB) and its armed affiliate, Eastern Security Network (ESN) through one Ebubechukwu surname unknown and became the Operational Commander and Chief Trainer of the outlawed group where he claimed to have trained over one thousand members in weaponry and terror attack in their Camp located in Ogbotoukwu, a forest, in Obowu LGA of Imo State.”

On the killing of Ahmed Gulak, the former Political adviser, of former President Goodluck Jonathan, the police said:  “He further confessed to have participated and led in several vicious killings of Security personnel, attacks on INEC offices, burning of Police stations, murder of innocent people, armed robbery/kidnapping, terrorism and narrated how on 30th May 2021, they murdered the late Ahmed Gulak, the former political adviser to former President Goodluck Jonathan. He confessed that he led the operation and they double-crossed and stopped the Toyota Camry Taxi car that was taking him and his friend to the airport and ordered them to come down, shot him but the bullet did not penetrate his body, so he went to him removed the rings on his right fingers, shot and killed him along airport road.”