By EditorJanuary 5, 2023No Comments6 Mins Read 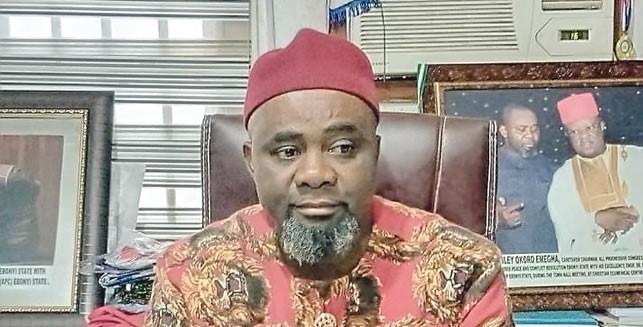 At least four persons were killed in political violence in the area on boxing day in the past year and on New Year day.

The violence according to police was as a result of supremacy battle between the duo who have been age-long political foes despite being in same party.

On boxing day, a clash between supporters of the duo took place in Ekoli Edda leading to the death of three persons.

Those killed include Mr Emegha’s younger brother, his police detail and a youth Leader from the community.

Reports said Mr Emegha’s security aides shot sporadically in the community killing the youth leader which prompted a reprisal that led to the killing of his police aide, younger brother, and the burning of his properties.

On new year day, gunmen stormed the home of Ebubeagu Commander, Kalu Chima, killing his wife and burning down his house in the same local government area.

Mr Kalu alleged that the attackers were supporters of the APC House of Representatives candidate.

Also there have been allegations that those who carried out the killings were from Ekoli Edda.

But Mr Eni Uduma Chima on Thursday, exonerated the people of Ekoli Edda community in the council area from the killing of the wife of the Ebubeagu Commander, Kalu Chima.

This was as he vowed to deploy his time, energy and resources to, in collaboration with security agencies, unravel the perpetrators of the heinous act.

He also urged mischief makers to steer clear from their antics of disunity and name-calling in order to curry favour from the authorities.

Mr Eni claimed neither he nor any member of his Ekoli Edda community had a hand in the incident, calling on relevant authorities to swing into action to unearth those responsible and bring them to book.

He said: “The killing of a pregnant woman and wife of the Commander of Ebubeagu Security Operatives in Afikpo South Local Government Area is extremely wicked and condemnable.

“This barbaric act cannot be excused under any guise, and I shall invest my time, material, and other resources to get to the root of the matter and cause law enforcement agencies to bring the perpetrators to book.

“While I condemn in the strongest terms these satanic acts, I make bold to state that the general public should not be deceived by the attempts by desperately wicked individuals to divert attention from objective, thorough and diligent investigation. The red herring will not stand and their dubious conclusion cannot endure, for it will be exposed for what it is – a sham.

“I do not wish to join issues with the S.A. to the Governor of Ebonyi State on Internal Security, Hon. Eze Panchris Ikechukwu, concerning the statement attributed to him to the effect that the atrocities of arson and murder of a pregnant woman were traceable to Barr. Eni Uduma Chima, former Chairman of Afikpo South Local Government Area, as the sponsor and “those who call themselves Warriors of Edda or Ekoli…”

“Hon. Eze Panchris Ikechukwu may be speaking from an honest but ignorant mindset, especially having no training in crime and investigation. But then, such disposition should not be a license to sell dummies to the public when he has ample room to double-check and find facts.

“Eze may also be speaking from emotions, considering the enormity of the crimes and the fact that the Commander of Ebubeagu whose wife was killed, is his comrade. Also, coming at the heels of the ugly occurrences in Ekoli Edda on 26th December 2022, the temptation to generalise hastily is there, yet, one should be circumspect with words not backed up with corresponding facts.

“I make bold to assert that the arson and killing of a pregnant woman in Amoso Edda have nothing to do with the Ekoli-Edda people, who regrettably violently reacted to the killing of a youth leader- Mr. Eseni Kalu Egwu – in Ekoli Edda.

“The Amoso Edda atrocities also have nothing to do with the supporters and loyalists of Barr. Eni Uduma Chima who are currently being harassed all over the places by Ebubeagu Operatives.”

I did not provoke shootings, says APC Chairman

Meanwhile, the State APC Chairman, Mr Stanley Emegha, who is also the Special Security Consultant to the State Government, denied provoking shootings in Ekoli Edda, Afikpo South Local Government Area of the state in which his younger brother was killed and his houses and vehicle burnt.

Emegha described as wicked, false and mischievous, the reports in some sections of the media that he was blowing siren and shooting sporadically which provoked the killings.

He wondered why he was linked to the shootings in the community which started in Ameke village in the area where he went to inspect a town hall he was building for the people.

He opined that the traditional rulers have absolved him of the shootings before Governor Umahi and challenged journalists to always cross-check their information before dishing them out to the public and expressed dismay over the reports.

He expressed confidence in the security agencies in the state who he said will unravel the truth and bring perpetrators of the mayhem to book.

Emegha commended Governor Umahi for his quick intervention into the dastardly act and peaceful leadership which he said prevented it from escalation.

“What people don’t know is that I was with traditional rulers who came to congratulate me on the recent award by His Excellency the Governor.

After seeing the elders, I moved to where I am building a town hall for the people of my village. While I was there inspecting the building, I started hearing gunshots.

“As a peaceful person and a man under grace, I ordered  security personnel that were with me not to respond to the shootings because it will lead to many things  which I will not like and they obeyed me and we left the community immediately.

“At what point did I shoot and blow  any siren?,” he said.