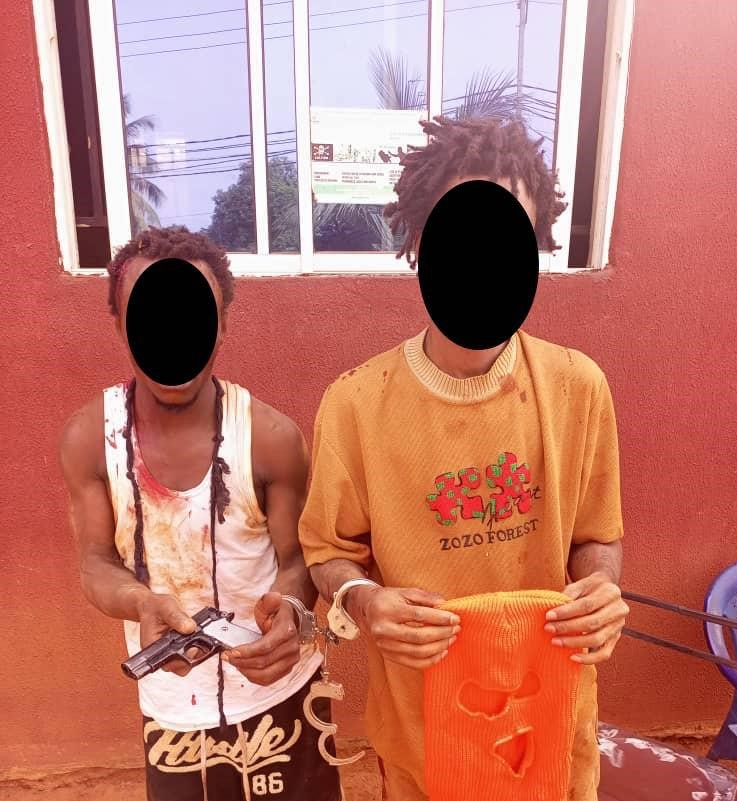 The suspects nabbed by Police

One suspected criminal was  shot dead, while two others were arrested  after a gun battle with security operatives attached to the Anambra State Police command.

Police in a statement, said the incident took place at Nkpor, Idemili North Local Government Area of the state.

The statement signed by Tochukwu Ikenga, the Police Public Relations Officer in the state, gave the names of the suspects as  Caleb Nwankwoa, aged 22; Katchi Nwolisa, 23; and Okechukwu Freedom whose age could not be ascertained.

It said: “The suspects, on sighting the police and in an attempt to escape the scene, started shooting indiscriminately prompting the security forces to respond after which Okechukwu was demobilised and two others arrested with gun wounds.

Police said that the suspects, during interrogations, confessed that they were members of Viking Confraternity and that the late Okechukwu was their leader.

In a related development, Police said it recovered one locally-made pistol, one expanded cartridge and one ladies’ motorcycle that were abandoned by suspected criminals on sighting the police operatives.

“Operatives responding to distress calls on 11/1/2023 by 10:30 am along Little Hood Estate, Obosi, recovered one locally made pistol, one expanded cartridge, and one ladies’ motorcycle.

“The suspects, sighting the police operatives abandoned the recovered exhibits and took to their heels. Efforts are in top gear to arrest the assailants.”

It said the Commissioner of Police, CP Echeng Echeng had ordered Area Commanders, Divisional Police Officers, and Commanders of Tactical/Operational Units/Formations to embark on aggressive crime-prevention and visibility patrols in their areas of responsibility.

This plan, the Commissioner stated, would enhance policing strategy put in place to respond to any emergency, and security concerns and prevent untoward activities by criminal elements in the state.