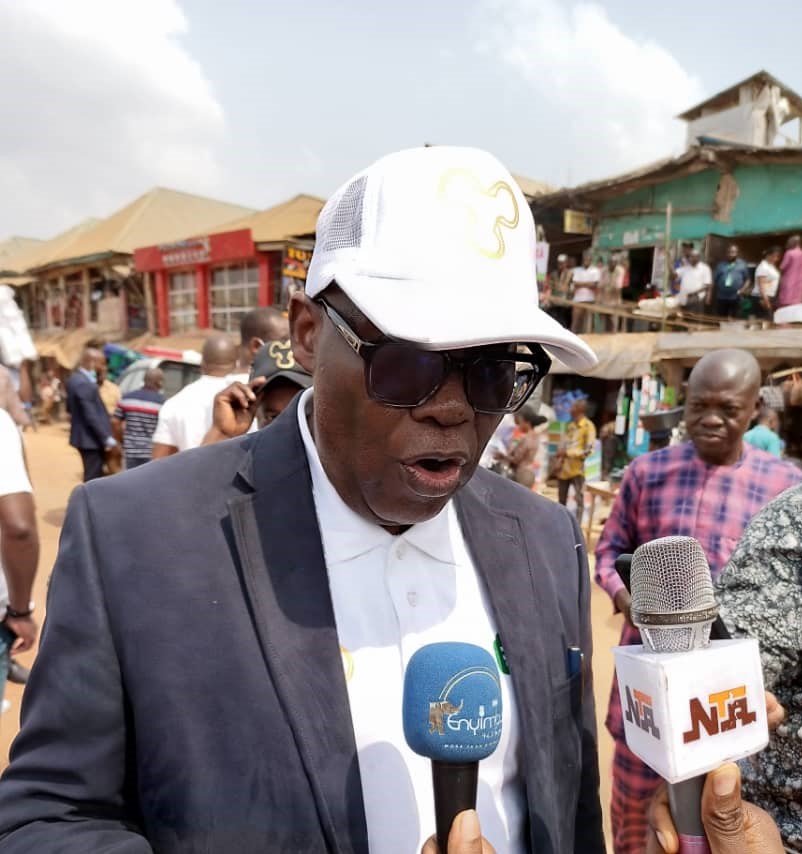 Addressing traders on the gains of the change of currency notes, Director, Corporate Communications Department of the CBN, Mr Osita Nwanisiobi, said the action was aimed at controlling the volume of money in circulation.

Nwanisiobi  explained that the new policy,  was a necessary measure to bring back larger chunk of money in circulation into the banking system.

He regretted that too much cash in circulation was outside the banking system, a development, he said was hurting the economy.

According to him, about N2.76 trillion out of N3.26 cash in circulation is outside the banking system.

He equally said that the measure was aimed at reducing the cost and danger associated with managing cash as it would make more people to embrace electronic transmissions.

Nwanisiobi, therefore, encouraged Abians to embrace other modes of payments instead of cash.

He said that CBN would sanction  any bank hoarding the new currency notes.

He also said that commercial banks which failed to collect their allocations of the new currency notes or flout the directives on their distribution would be sanctioned.

He, urged Aba traders and residents of Abia State, to beat the rush by going to the banks to deposit the old currencies ahead of the deadline.

Nwanisiobi warned against rejecting the old Naira notes before the deadline, saying they remain valid legal tender until January 31.

On the guidelines concerning the distribution of the new currency notes, Nwanisiobi said it should not be picked over the counters in the bank but only via the Automatic Teller Machines ( ATM), warning that any bank dispensing it over the counter will be disciplined.

He explained that the new Naira notes had enhanced security features making it difficult to be faked, and urged people not to reject them.

Nwanisiobi, however, said that anyone caught abusing the new currency would be prosecuted.

He equally explained that part of the reasons for the new policy on currency was to encourage people to embrace other modes of payments in lieu of cash transactions as obtains in civilised societies.

Nwanisiobi also said it was aimed at reducing the cost and risk of managing cash, and to withdraw mutilated currency notes in circulation.

The CBN Spokesperson who led other officials of the apex bank to monitor compliance in some banks in the state, noted with detest that some banks still dispensed old currencies in their ATMs.

It was also observed that in some banks only one or two ATMs dispensed the new currency notes, thus forcing customers to be on a long queue.

There was a mild drama in one of the old generation banks on the Aba-Owerri Road near Ikot Ekpene junction, which upon the arrival of the CBN team hurriedly rushed into its ATM room to load the new currency notes.

In his remarks, Chairman of Ariaria International Market, Aba, Elder Emeka Igara, appealed to CBN, to consider a special waiver for Aba traders such as allowing them to withdraw up to N100,000 of the new Naira notes over the counter to quicken the circulation process.

He said that anyone who failed to comply with the information should not blame the apex bank for the consequences of ones flouting of the directives.

One of the traders at Ariaria International Market Aba, Mr Felix Madu, told Ikengaonline that he was not happy about the plan of the CBN to change the old currency notes, saying it was not the immediate challenge of the country.

He said that the CBN should have been more concerned about addressing the economic hardship in the country instead of re-designing the naira notes which he said, was the least of the issues bothering the suffering masses.

“We have other more important issues than changing the old Naira notes. CBN should be talking of how to bring down the cost of fuel and how to reduce the economic hardship in the country,” he fumed.