A lawyer,  Sir Obunike Ohaegbu, has thrown his weight behind the petition by Festus Keyamo, SAN, for the arrest and prosecution of the presidential candidate of the Peoples Democratic Party, PDP, Atiku Abubakar.

He has  petitioned the Economic and Financial Crimes Commission, EFCC; the Independent Corrupt Practices and Other Related Offices Commission, ICPC;  the Code of Conduct Bureau, CCB; and the Inspector General of Police, IGP; asking them to extend their drag net to the presidential candidates of the All Progressives Congress, APC, Asiwaju Bola Ahmed Tinubu;  and his Labour Party counterpart, Peter Obi.

He supported the 72-hour ultimatum given to them by Keyamo to arrest and prosecute them.

He wants the anti-graft agencies to arrest and prosecute the three leading presidential candidates for the following  offenses: offense against code of conduct bureau; money laundering, criminal breach of trust and criminal misappropriation, conspiracy and drugs and narcotics.

“I write this petition in support of the petition submitted to you by one Festus Keyamo, and I wish to adopt all the facts and suggestions/demands made in the petition as mine,” he said.

On Tinubu, he said:  ‘’There is the urgent need to conduct investigation over strong allegations on his true identity and age.

Continuing he said: “That would also clear some issues concerning the Primary and Secondary Schools he attended and consequentially resolve the puzzles surrounding his Schools Certificates.

‘’The investigation on the allegation of conviction of drug related crimes in the United States also needs to be made and Nigerians promptly informed of steps taken to investigate the allegation.

‘’The Nigerian voters deserve to know if he actually forfeited the sum of   $460,000 to the United States of America for his convictions on Narcotics Trafficking and money laundering in the United States?

‘’The allegation of using Alpha Beta as the SPV for tax consultancy while serving as the governor of Lagos.”

Read the full petition below: 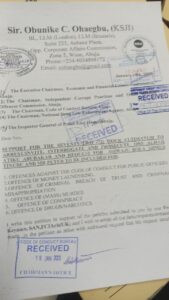