By EditorJanuary 25, 2023No Comments4 Mins Read 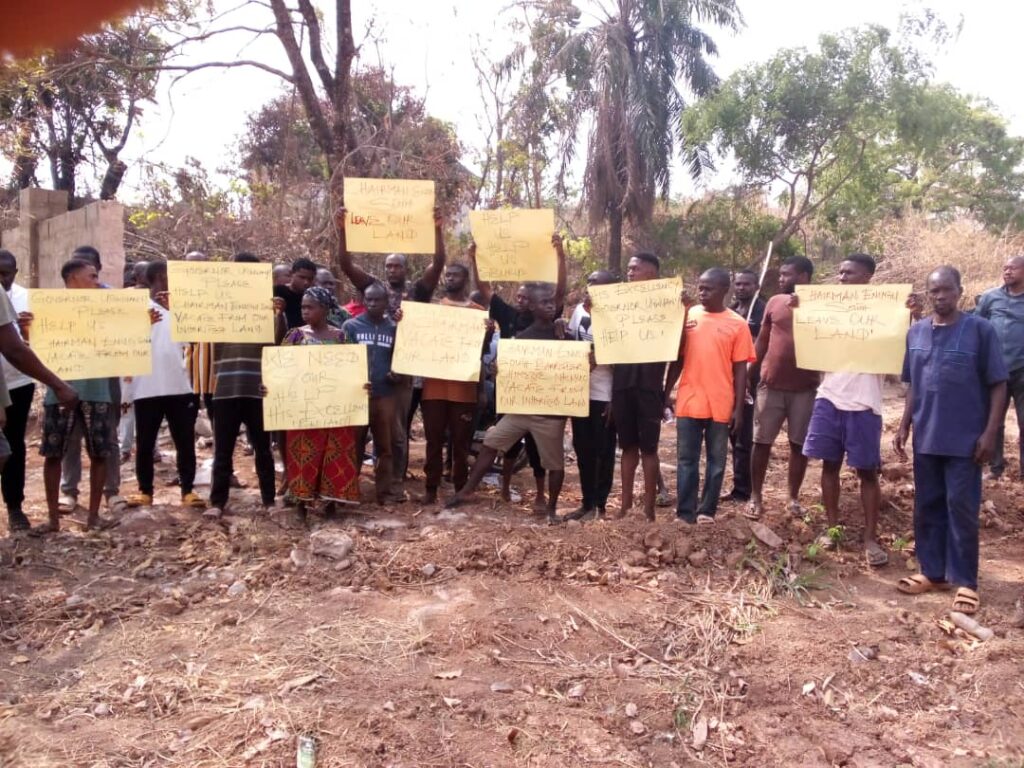 The Umunugwu village in Ugwuaji Community in Enugu-South Local Government Area have accused the Chairman of the Council Hon. Chimezie Nkwuo, of encroaching onto their land.

The community members in a mass protest in Enugu said Nkwuo encroached onto their ancestral land along Enugu/Port Harcourt Expressway without approval, adding that a caterpillar had cleared up the land.

They appealed to the Governor of Enugu State, Ifeanyi Ugwuanyi, to come to their aid and direct the chairman to leave their land with immediate effect.

Mr Okwudili Aniahu, Chairman, Umunugwu General Assembly said the land belongs to Umunugwu, adding that they did not give anyone permission to enter the land.

He said: “This is the only land Umunugwu has for now and we divided it according to individuals.”

Aniahu further alleged that Nkwuo took caterpillar into the land without the permission of the Umunugwu General Assembly.

He said that Nkwuo was aware that the land belongs to them because he came from Ugwuaji.

“Our protest is that the chairman should leave the land. We are calling on His Excellency, Gov. Ifeanyi Ugwuanyi, to help us as we do not have any land again.”

“Many of us have not built on it since it was shared while the ones already started building, their structures were destroyed in the process of encroachment.

“This land was given to us by our great grand fathers; we inherited it individually, as a result, we do not have any document covering it,” he said.

Also, an elder from Umunugwu village told Ikengaonline under the condition of anonymity, that the entire Ugwuaji community shared their land and the area in dispute.

He said, “We have no document that covers it or to be presented but the land was given to us when Ugwuaji community shared their land.

“We don’t know why the chairman feels like coming into the land without consulting the community and the General Assembly.

“He knew very well that this side belong to Umunugwu family since he was from Ugwuaji,” he said.

He added that they had 6 communities in Ugwuaji and all of them had their own lands in the area.

“So we are calling on the Enugu State Government to help us recover our land,” he appealed.

In his reaction, Nkwuo denied being involved in the land, stressing that they just wanted to tarnish his image and bring his character to disrepute.

According to him, the land they are talking about may be a place where the State Government wants to build access road to Community Secondary School Ugwuaji.

“I will verify and respond appropriately so that I will know the people protesting.

The Commissioner for Works and Infrastructure, Mr Greg Nnaji, said Gov. Ugwuanyi had employed consultative method in seeking for development.

He said the Ministry of Land and Urban Planning, Enugu State, had engaged the community in an attempt to open up the axis for development

“In furtherance on that, the state is aware of that road and this corroborates the information Nkwuo gave,” he said.

Nnaji said the action of the protesting youths over the land was unfortunate, saying the media should help to guide them.

According to him, the first thing that comes in for the development of an area are critical infrastructure like roads, electricity and water and this is what the state government wants to do fast in Ugwuaji.

The commissioner further explained that Gov. Ugwuanyi ran an open government, stressing that the community was duly informed about the development plan.

“I sincerely appeal to them to sheath their sword and embrace development.

“Development is the key and we have done so much in Enugu State for over seven  and half years in opening up rural communities in an attempt to decongest Enugu as a city.

“So, opening that road is a new phase of development in that zone and I ask them to embrace peace and let the job go on,” he said.